A Windows Mobile emulator can simplify mobile device testing without costing a lot of money.

Whether you are attempting to develop a new mobile application, test a mobile networking configuration, or experiment with mobile device security, testing with mobile devices tends to be a pricey endeavor. There are not only the costs associated with purchasing the necessary mobile devices but also the cost of the air time used during the tests. Fortunately, it is possible to install an emulator that allows you to do most of your testing on a PC rather than on a mobile device. In this article, I will show you how to deploy a Windows Mobile emulator -- similar to the one shown below -- that you can use for testing purposes. 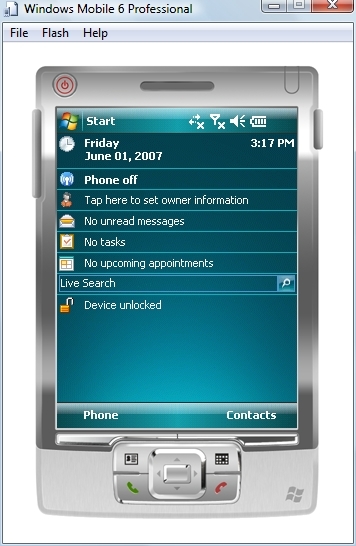 It is possible to emulate Windows Mobile devices rather than using physical hardware for testing purposes.

One option is to purchase an MSDN subscription. Purchasing MSDN won't save you any money, but it will give you access to many other Microsoft products, so it may be worth your while. Another option is to become a registered Microsoft partner. Registered Microsoft partners receive Visual Studio as a part of the registration. A final option is to order the Windows Mobile 6 Developer Resource Kit (http://msdn2.microsoft.com/en-us/windowsmobile/bb264329.aspx). It contains a 90-day trial version of Visual Studio.

If you are installing Visual Studio on top of Windows Vista, then there is one more update that you are going to need. Microsoft offers a compatibility update for Windows Vista. This 30 MB file must be installed after Service Pack 1 has been installed. Again, this file is available through MSDN for those who do not want to take the time to download it.

Install ActiveSync
The next step in the process is to install ActiveSync version 4.5. This step is necessary only if you will be running the emulator on a machine running Windows XP or Windows Server 2003. This component is not required for Windows Vista users, but an alternative component is required. ActiveSync is used to provide connectivity between Visual Studio and Windows Mobile devices.

Conclusion
You have now installed all of the necessary components to use the Windows Mobile emulator. The emulator is designed to emulate a number of different Windows Mobile devices and versions. In Part 2 of this series, I will show you how to access and configure these various emulators.

About the author:
Brien M. Posey, MCSE, is a Microsoft Most Valuable Professional for his work with Windows 2000 Server and IIS. Brien has served as CIO for a nationwide chain of hospitals and was once in charge of IT security for Fort Knox. As a freelance technical writer, he has written for Microsoft, CNET, ZDNet, TechTarget, MSD2D, Relevant Technologies and other technology companies. You can visit Brien's personal Web site at www.brienposey.com.