Today, few employers can insist that employees use just one kind of smartphone, but comparing the manageability and security of today's top mobile operating systems is useful for establishing platform preferences and acceptance criteria.

In some ways, the popular mobile operating systems are very similar. They all support some kind of mobile device management (MDM), but the way each OS supports MDM is different. Some have device-native capabilities and others require third-party MDM agents. The same can be said for security settings: All four of the mobile OSes have password, encryption and access control options, but those options differ from one OS to another.

Whether a certain OS will work for you depends on what you want it to do. But knowing what you're getting from each OS can make supporting them easier.

Decide what to compare

The first step is to establish scope: Which mobile operating systems should you compare? According to IDC's December 2012 global market share report, Google's Android OS leads the smartphone market with 68%, followed by Apple's iOS at 19%, Research In Motion's (RIM's) BlackBerry OS with 5%, and Microsoft's Windows Phone with 3%. Furthermore, IDC expects these four OSes to represent 98% of the market through 2016, with just one spike -- a 10% increase in Windows Phone sales as Microsoft original equipment manufacturers (OEMs) get back into the race.

Why mobile OS fragmentation is a problem

As a result, almost every smartphone or tablet that members of your workforce use is likely to run a version of one of these four OSes, although you never know when the next game-changer will arrive. Unless your company has unusual needs, you can put niche OSes such as Symbian and Linux/Bada out of scope, and focus on managing and securing Android, iOS, Windows Phone and BlackBerry devices.

Smartphone and tablet manageability depend on the capabilities of the mobile OS and its ability to interface with your MDM platform. Today, there are three common approaches to over-the-air MDM.

The following table summarizes the extent to which each of the most popular mobile operating systems and versions supports these management approaches, as of January 2013. 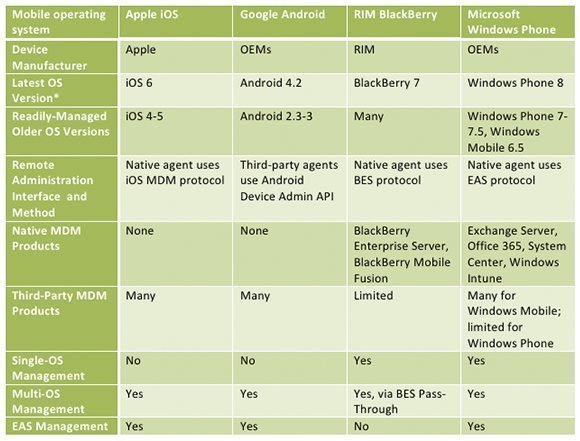 If EAS meets your management needs, then all contemporary devices except BlackBerry can connect to your enterprise mail server. For deeper visibility and control over all devices, go with multi-OS MDM from vendors such as AirWatch, Fiberlink, Microsoft, Mobile Iron, RIM and Zenprise. For BlackBerry management, you'll need BES, either alone or with a multi-OS MDM product. 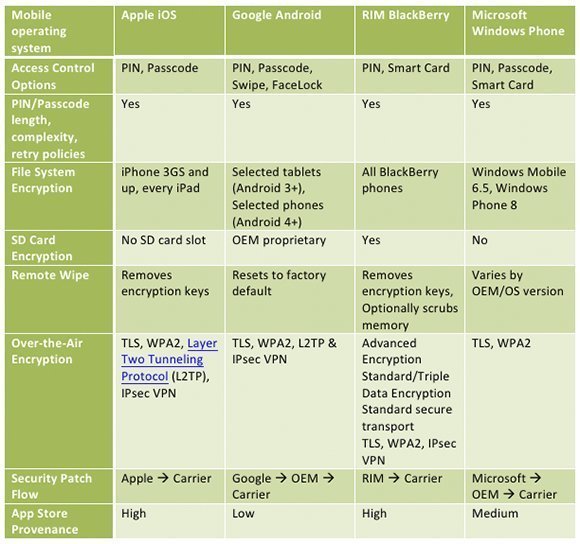 As you can see, the top four mobile OSes are largely the same when it comes to numeric PIN or alphanumeric passcode support. Organizations that require smart card authentication have fewer choices.

Similarly, the latest versions of all four mobile operating systems support encrypted file systems that protect every bit of user and application data stored on a mobile device. But organizations that mandate full-device encryption will need to be a bit more selective, avoiding Windows Phone 7 and Android devices that are physically unable to support this policy. (Alternatively, data stored on those devices can be software-encrypted.)

Although it is difficult to roll all of these security capabilities into a single "grade" for simple comparison of mobile operating system security, BlackBerry phones are widely regarded as the most secure devices, followed by Apple iPhones and iPads. Android device security is improving but still depends heavily on device make and model.