In the world of sports, there are two things that fans obsess over: the games and the statistics that surround those games.

Millions of fans will visit sites like Yahoo Sports and NBA.com this month to track the progress of the NBA Finals series between the Boston Celtics and the Los Angeles Lakers. And the source of the stats that describe the progress of those games is a set of Lenovo ThinkPad X60 Tablet laptops that sit courtside.

"We do the scoring for the NBA and the time clock for the NBA," said Stephen Hellmuth, executive vice president of operations and technology for the NBA. "The information goes out globally, and the world gets it right here from courtside. You'll see stats shared everywhere." 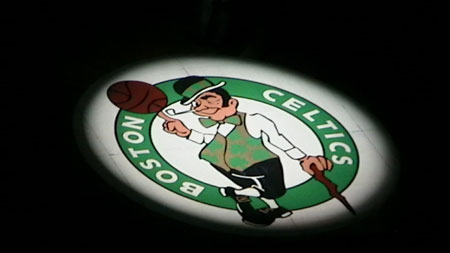 The Celtics logo at center court before Game 1 of the NBA Finals.

The ThinkPads have custom software that displays a graphical representation of the basketball court on their touch-screens, along with boxes representing players and stats such as rebounds and field goals. A primary statistician updates the information on the touch-screen, and the information goes out in real time throughout the building and on a T1 line to NBA headquarters in Secaucus, N.J. From there, it gets distributed throughout the world. A second statistician works with another ThinkPad to edit mistakes and to serve as a backup if the first laptop goes down. A third machine stands by, for further redundancy.

"The original implementation – they were on IBM ThinkPad tablets," said Jay Wessel, vice president of technology for the Boston Celtics. "That was before modern touch-screens were invented. So we would have them modified."

Wessel said Information & Display Systems Inc. (IDS), the company that custom developed the scoring software that runs on the laptops, customized the older machines with "add-on" touch-screens, but the quality of those older screens was poor. They wore out quickly.

"The tablet PC with the integrated touch-screen from Lenovo has made it so much better," Wessel said.

"This system is meant so that the statisticians can keep up with the action on the court," Hellmuth said. "The stats are updated in real time. The fans want to look up at the display after a guy hits a bucket and see that he is three-for-four." 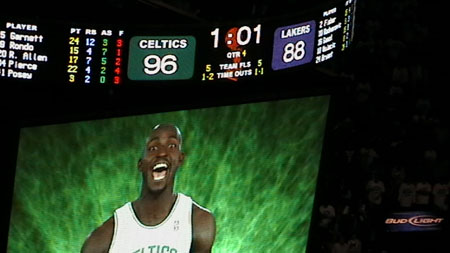 The Garden's scoreboard near the end of Game 1 of the NBA Finals.

Wessel said the Lenovo laptops are subject to strict security measures. Other than the direct link to the NBA's network, they have no other network connections. In fact, the laptops are on a network that is completely separate from the rest of the network in NBA arenas like L.A.'s Staples Center and Boston's TD BankNorth Garden.

The ThinkPads' wireless functionality has been disabled as well. Aside from the custom scoring software from IDS, no other applications are allowed on the machines. Wessel said IDS developers have written protocols that avoid TCP-IP altogether in order to avoid any breaches.

The NBA's collaboration with Lenovo is part of a global marketing partnership that the two organizations launched nearly two years ago. As part of that partnership, Lenovo technology is deployed throughout the league.

Hellmuth said all of the league's referees are also equipped with Lenovo laptops.

"The referees have Lenovo laptops," he said. "As soon as they leave the game, they have a disk that has a digital recording of the game. They get on an airplane that night, and they can start looking at their performances and breaking it down. And they have a website they can go to that has learning materials, complete copies of games, and reviews by their peers."

"Right after the game, they will write up a review of the game," Hellmuth said. "'This is what I did well during the game. This is what I don't think I did right. These are the plays that I want my supervisor to look at to see if he agrees with the call I made.' So they do a kind of self-review, and it all boils up into a system we call an officials' review system."

Wessel also mentioned that referees wear wireless belt devices from Precision Timing that tie wirelessly into the arena's timekeeping system. Referees can start the game clock by pushing a button on the belt device. The device is also wired to the referees' whistles. Every time a referee blows a whistle, the belt device detects the frequency and stops the clock.

These devices were deployed in order to cut down on human error, Hellmuth said. Sideline timekeepers could stop the clock with a push of a button no faster than two-tenths of a second after hearing a referee's whistle, he said. That just wasn't fast enough for a league that measures time at tenths of a second in the final moments of a game.

Let us know what you think about the story; email: Shamus McGillicuddy, News Editor