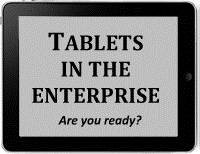 The tablet -- with its easy-to-use interface, lightweight body and a size that's neither too big nor too small -- is all the rage. Consumers and a handful of niche industries are smitten with these touch-screen devices, and users may be asking for tablets in your enterprise. Get ready for the inevitable with this guide, which features the latest tablet news and tips as well as reviews.

Where tablets make sense in the enterprise
Everyone's talking about tablets, and while these touch-screen devices aren't an alternative to full desktops, in certain cases, they can be handy.

Microsoft girds for iPad war with ARM, tablet plans
IT managers in Windows shops can expect Windows 8 to support low-power ARM chips for tablets and other devices.

Can Windows and Android catch up to the iPad in business?
The iPad is popping up in the hands of executive across various industries, and while Windows, Android and BlackBerry-based tablets may have business advantages and better security, that doesn't mean they'll be more successful -- for now. (From TabletPCReview.com)

iPads ruled 2010's most-wanted gadgets list
Although a handful of tablets were released late last year, the Apple iPad was the most popular by a landslide. Will it hold on to its lead in 2011?

Not sure which tablet makes the most sense for your business? Check out these tablet reviews from our sister site, TabletPCReview.com.