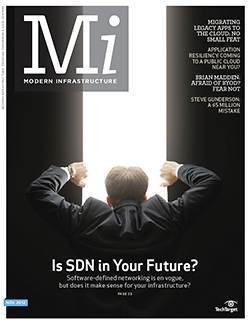 This article is part of the Modern Infrastructure issue of November Volume 1, Issue 2

Christmas came early for gadget-loving end users this year. With all the new smartphones and tablets hitting the market this fall—and making their way into the workplace—IT has even more devices to keep an eye on. The iPhone 5 will be the most prevalent of this latest batch, as Apple sold 5 million units in its first weekend alone. It’s the first iPhone that supports LTE networks, so it could lessen the strain on corporate Wi-Fi networks. But if your company pays for employees’ data plans, keep an eye on the bills: LTE lets devices consume a lot more data than their 3G counterparts. The new iPhone and iPad operating system, iOS 6, also allows more apps to tie into iCloud, so also watch out for new ways that corporate data can leave the firewall. Microsoft's responses to Apple's device dominance are Windows 8, Windows RT and Windows Phone 8. Windows 8, an x86-based desktop OS, and the Windows RT OS, which is for ARM-based tablets, offer a completely different, touch-based interface than people are used to, with interactive tiles ...

Columns in this issue